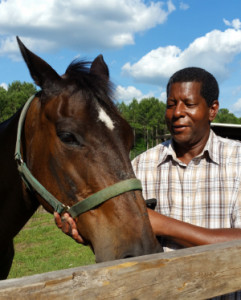 Amazing Grace:  The Story of Felton and a Horse Named Humble

In a bare and dirty corral northeast of Jacksonville, a horse was starving.  It’s owners had lost the ability to feed it and care for it—often feeding it just table scraps and whatever else could be found.  Horses often live well into their 20s and 30s, but this young gelding would be lucky to live to see his 8th year.  At only 7 years old, you could see every rib bone through his filthy and matted coat.  His hip bones appeared to be barely covered with skin.  His mane was ratty and his tail was chopped short because someone had thought it would be easier to cut it off than to brush it out.

After a few discussions and calls with Trinity Rescue Mission, the horse’s owner joyfully relented, clearly relieved of the burden and responsibility of feeding and caring for the massive animal.  The horse arrived at Freedom Farm to green pastures, fresh hay, clean water and men eager to care for this boney horse each and every day.  Due to his gentle and meek demeanor and his easy contentment in finding his place at Freedom Farm, one of the farm men named this horse “Humble”.

Felton grew up in Decatur, Georgia.  As a young man, he spent 3 weeks every summer at his grandparent’s farm where he learned many of life’s lessons and how to care for animals who depended on him.  Every summer at the farm, Felton was encouraged in his life and developed a deep love for Jesus Christ.  Felton loved his grandparents and their farm and the wisdom he gained there would surely last him a lifetime.

But in time, Felton’s life would seem to become sidetracked.  His grandparents were no longer around. Bad decisions and resulting consequences took a toll on his promising life.  When you add in bad circumstances and being in the wrong place at the wrong time, Felton was in more than a slump, it seemed as if his life was out of control and he could do nothing right.

Oh, how he missed those days at the farm, caring for the animals and connecting with Christ on the deepest level.  But now, with no real home and constant uncertainty of where he would sleep and what he would eat, Felton wondered if he would ever experience the peace of that farm again.

In late 2014, Felton found himself at Trinity Rescue Mission on Union Street in Jacksonville.  He had enough and it was time to get help.  It was time to be humble.  The Lifeline Program would give him 90 days to figure things out, but he heard of Trinity’s Freedom Farm in St. Johns County.  He knew that Freedom Farm had to a place for him.

Felton breezed through the 90 day Lifeline Program at the mission and quickly became a leader.  As he renewed his walk with Christ, he could only imagine what Freedom Farm must be like.  He got to find out in December of 2014 when he started the Freedom Farm Program.

It did not take long for that peace that Felton yearned for since leaving his grandparents farm to be restored.  The truth of the scripture was being taught, animals relied on him for their needs and the environment was positive, encouraging and empowering.  Felton found himself again.  Felton rediscovered who he was created to be.

Humble was originally named “Remington” by the staff, but the name Humble stuck.  The men at Freedom Farm immediately connected with a starving horse that had little hope and little value to the world.  The men recognized that story as their own.  They were determined to see Humble survive.

Felton was there that day when Humble was unloaded.  He was shocked to see  the condition of the horse, but he knew that Freedom Farm was just what Humble needed.

Today, Humble is thriving.  His weight is slowly but surely returning and his healthy coat shines like polished bronze in the sunlight.  His mane and tail are kept brushed and his tail is slowly growing back.  Felton said you can hardly believe that he is the same horse.  Felton says with smile, “His spirit and energy have even changed!  If he keeps it up, we may need to go back to calling him Remington!”

When asked about the thought of God crossing the paths of both a man and horse in need of rescue, Felton laughed his cheerful laugh and said, “It is amazing, it is the grace of God!  It really is amazing.”  And that is the story of how amazing grace changed the lives of a man and horse. 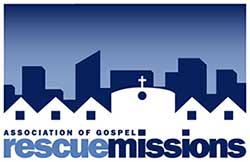